Method lookup is an interesting topic in Ruby. For example, exactly what happens that produces this output from this code?

The algorithm for method lookups can be summarized in one sentence: “one step to the right, then up”. This is referring a specific visualization of objects and classes relationships, where we place object’s class to the right from the object, and place ancestor of a class above it. 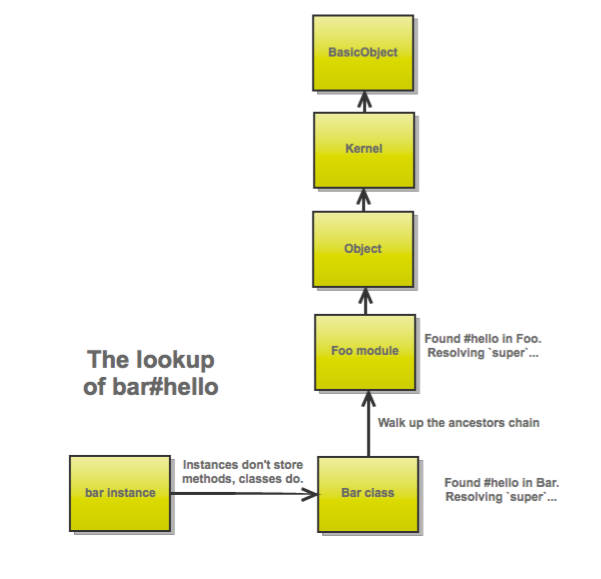 It’s important to understand that instances in ruby do not hold methods, only classes do. At the same time we’re able to enhance specific instances with additional methods, that other instances of the same class will not have. Look:

Here bar2 instance does not have a hello method, while bar1 does have it. This means that hello method can’t be in bar1 instance itself (remember, instances don’t contain methods), but it also can’t be in Bar class, because then bar2 would also have it. So, where is that method located?

Well, there is a special hidden class for every object instance in ruby. This dynamic class is where all those per-instance methods go. You won’t be able to see it in the ancestors chain, ruby hides it from you. But it’s there (well, technically speaking, it appears there when you define your first per-instance method). So, in this case the lookup goes like this:

But what happens if Bar also defines a hello method? Which gets found and executed first? Can you tell by looking on the pictures above?

That’s right it will print “bar”, then “foo”. Why? Because Foo#hello will be injected before Bar#hello in the ancestors chain. It will go into that dynamic unique class (which is called eigenclass, by the way). Here’s the lookup flow: 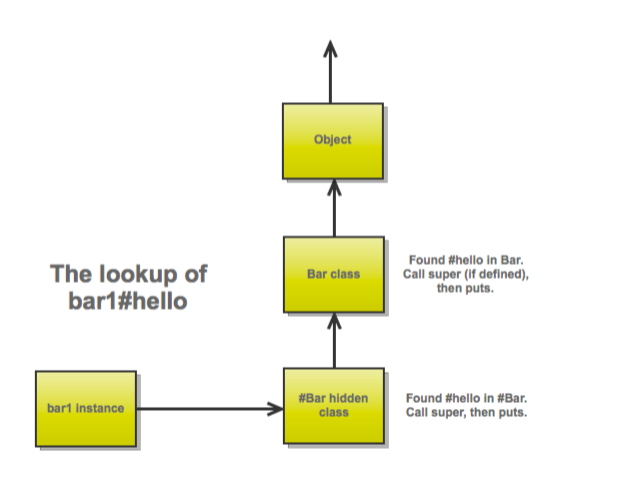 Method from Foo is found first and it calls super, which is the version in Bar class. This version also tries to call super (there isn’t one), then prints “bar” and returns control to Foo#hello which prints “foo”.

Now you see, it’s a simple algorithm. But it can be really puzzling if you don’t know about eigenclasses.